According to the respondent, they started walking on an unpaved road and continued walking through farmlands, mountains and forests for a day with a thirty minute break every two hours. At around 10 a.m., on 5/5/2022, they arrived at this location close to the highway (location pinned by the respondent).

Image 1: Location pinned by the Respondent

They decided to rest here in a forest approximately 200 meters from the main road for about three hours, before they continued on walking on Road 7 between the Lesovo border gate and Elhovo. They had reportedly walked on the road for about one kilometer before they were stopped by a green jeep that pulled in in front of them. It was around 2 p.m. The respondent identified the car as pictured below with the license plate starting with the letters BG.

Image 2: Jeep identified by the respondent

According to the respondent, one man in a blue uniform stepped out of the car and asked the transit group in English, for their ‘documents’, but the men did not have any papers with them. When asked to further describe the clothes the officer was wearing, the respondent said it was a uniform with a deep blue jacket and pants, that had “police” written on it in white letters above the left chest of his pocket, and a logo with a lion on the sleeve.

The two men were then instructed to stand on the side of the road. The respondent described that from then onwards, all the communication happened through sign language and the men in blue uniforms pointing with their index finger. Then one uniformed man talked with someone on the phone in Bulgarian. Following this, the man in the blue uniform opened the trunk of the car and instructed the two men to enter the car from the back. The respondent described the trunk as two by two meters with many old tires in the back. There were windows and the respondent could look outside. After three minutes of driving up north, the car stopped, and two other men, wearing the same uniform entered the car. One of the men reportedly instructed the respondent and his friend to keep their heads low.

After the beating, the two men had to undress and they were standing naked for about 15 minutes, explained the respondent, and the men in blue uniforms took their backpacks, phones, money and shoes (the respondent and his companion were both carrying around 250 euros). The Iraqi man was instructed to open his phone and enter his security code. Subsequently, one of the uniformed men took a picture of the two men while they were naked, and then instructed the two men to get dressed again. There was no communication in English for this entire interaction.

Around 15:00 the two men were put into the trunk of the car. The respondent described that when he was looking outside of the window before driving off, that one of the uniformed men gathered the belongings of the transit group and hid it in between the bushes.

After that, they drove for about 10 minutes on an unpaved road until the car arrived at the border. The respondent described that he saw an unpaved road and a fence and there were cameras on the fence. He continued and said, there was a forest from both sides of the border and he could see the wind turbine in the Turkish territory. At this location, the respondent saw two Land Rover jeeps. The respondent identified the cars as the ones pictured below in Image 3. 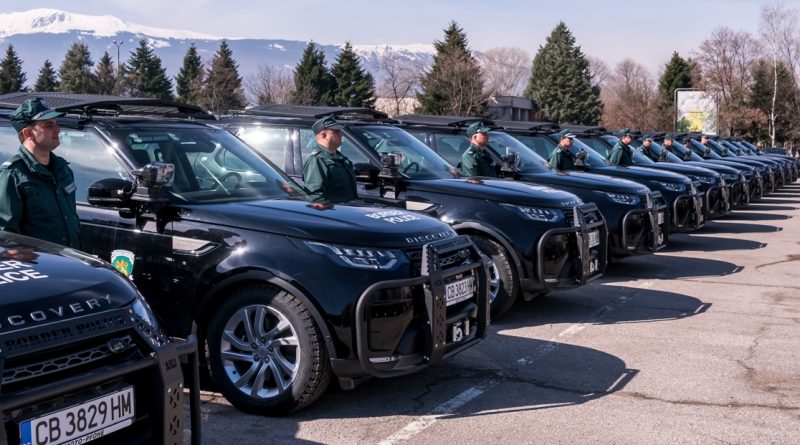 The respondent also mentioned that there were five other persons present, including one woman and a dog handler. The respondent described that they were wearing green shirts and pants. Two of the other persons were described to be wearing long sleeve shirts while the other three were wearing short shirts with a Bulgarian flag on their arms. On the back of their uniform, as recalled by the respondent, it had “border police” written on their back. The people described by the respondent were armed with firearms that remained in their holster and a plastic baton in their hands.

Upon their arrival, the respondent described how they were pulled out of the car by the men in green uniforms and the female person dressed in the green uniform entered into one of the cars while the other people dressed in green uniforms instructed the transit group to stand up. Then they forced the two men to undress again and searched them, described the respondent. He further stated how his ‘private parts’ were searched by a man. After being searched, the respondent was given his shirt and pants back, however, the clothes from the man from Iraq were not returned.

He recalled the beating lasting about five minutes, and afterwards,  the man from Iraq could barely walk.

Then, around 16.00, the men dressed in green uniforms opened the door in the fence and pushed the two men back to Turkey. The door, as described by the respondent, was a flip door that had to be opened from above. and it was about  half a meter in height. At this time, the respondent was wearing a shirt and pants while the other man from Iraq was still naked.

(Image 4: picture of the respondent’s arm)

According to the respondent, after they were pushed back, the two men walked for two kilometers until they found old clothes for the man from Iraq who until this time, was still naked. Then, the two men continued walking for around two more kilometers until they came to the paved road. At about 18.00, they reached the Turkish village of Hamzabeyli. Here, Turkish citizens brought the two men to Edirne, recounted the respondent.

During their short stay in Bulgaria no fingerprints were taken. The men in green uniforms did not communicate with the two men in English and there was no interpreter present. When the testimony was taken, the respondent showed the wounds he obtained from the dog that attacked them.